The 2015 edition of the John Goldie Award was presented to Joan Crowe at the FBO AGM held in Peterborough on September 12, 2015. This was the ninth time the Goldie Award has been given to recognize an individual’s contribution to field botany in Ontario. Like those before her, Joan is a highly deserving recipient. 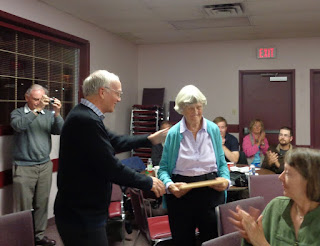 Joan comes to us from England where she was already a qualified teacher. In 1966, Joan and her husband Walter moved to Thunder Bay where Walter had taken a faculty position at Lakehead University. Joan later obtained an Honors B.Sc. from Lakehead University in 1970 followed by a Masters degree from the University of Manitoba in 1975 with a specialization in bryophytes. In the meantime, she started on a course towards career in botany accompanied by a long list of botanical publications. The first of these was A Checklist of the Hepatics in the Area Adjacent to the Canadian Lakehead with co-author Paul Barclay-Estrup in 1971.


Joan began to volunteer at the Claude Garton Herbarium at Lakehead University. The Herbarium was built on the collections made by Claude Garton starting with his collections that began as early as 1933. In time, Joan assumed the role of Acting Curator in 1990 and held that position until 1993. During that period, she began the process of digitizing the collection and maintained high standards for the collection. She also taught some courses on "Bryophytes and Lichens", "Pteridophytes" and “Vascular Plant Identification” at the University where her students held her in high regard.

While she was living in Thunder Bay, she continued to produce publications dealing with bryophytes:

Those were followed by the 1993 release of Checklist Vascular Plants of Thunder Bay District along Claude Garton. The first version of that list was originally prepared in 1968 by Walter Hartley and updated by Garton in1984, then revised to 1993. The most recent revision was completed in 2003.

In 1993, Walter and Joan moved to Owen Sound. Joan soon became active with the Owen Sound Field Naturalists. In particular, she became the Chair of the Plants Committee. That group has been very productive, and under her guidance, published several books on botany and relevant topics:

Not content to limit her literary output to these books with the Owen Sound Club, she produced two other books on her own. One of these was An Enthusiast’s Guide to the Liverworts and Hornworts of Ontario along with Linda Ley in 1999. In 2004, she self-published the First Book of Ontario Wildflowers.

Joan has always been a strong advocate for the environment. As an example, Joan and Walter with OSFN donated their property at Long Swamp located west of Owen Sound to the Nature Conservancy of Canada. This donation helps to preserve a large portion of this important wetland to ensure that it would remain natural and undeveloped

Joan and Walter have been long-time members of the FBO. They have attended many FBO field and AGM events over the years. Joan has led at least 9 field trips and workshops for FBO. As well, she has performed a similar role for the Owen Sound Field Naturalists. For all her fine contributions, Joan was presented with a Lifetime Membership Award from the Owen Sound Field Naturalists at the December 2006 meeting. It is now the turn for the Field Botanists to recognize all of the contributions that Joan has made in the field of botany in Ontario. Congratulations, Joan!

FBO
The FBO is a not-for-profit organization founded in 1983 for those interested in botany and conservation in the province of Ontario.